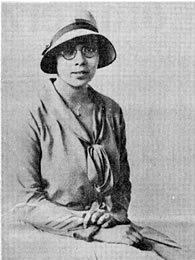 Beb Vuyk, best known for her Groot Indonesisch Kookboek (big/great Indonesian Cook Book), was much more than a great cook. She belongs to the most important Dutch-Indonesian (Indo) writers and journalists of her time. Her work has been awarded several prizes. She wrote about her years in the tropics during the time the Dutch occupied Indonesia and the Indonesian revolution after the war.

Elizabeth (Beb) Vuyk, born and died in the Netherlands (1905-1991), is of Indo descent. Her father, Wilton Vuijk Rudolf (1865-1947), is born in Indonesia and goes to Holland when he is young. He marries the Dutch Elisabeth Anna Maria Rotscheid (1871-1934) and they have three children. Beb is the oldest. She is teased because of her skin color.

‘Dirty nigger, black moriaan’, the boys in Rotterdam shouted to me,” blue one, liplap, Chinese! I always went to school holding a ruler.

In 1927 she receives her diploma in Amsterdam for teaching cooking and nutrition. She also takes English and literature classes and writes a few stories for the Christian family magazine Eigen Haard en De Vrije Bladen.

Her first few stories reflect a theme that can be found in her later work as well: the desire for a free life, a desire for an ‘exceptional life’ and at the same time the fear of alienation and loneliness, the fear of standing apart … ‘

In 1930 Beb Vuyk leaves for the Dutch – Indies because ‘a writer has to travel‘. She wants to discover her grandmother’s homeland, who originated in Madura. During the long boat trip to the tropics, she meets her future husband, Fernand. Everyone calls him Boet.

Her goal in the Dutch Indies is to go to Sukabumi. There she teaches at a Christian boarding school for neglected Eurasian children.

I thought a writer needs to travel the world, like Slauerhoff. That was something amazing. But I also went to the Dutch – Indies because I identified with my Madurese grandmother. I was twenty-five when I left the Netherlands. On board I meet Boet. I first worked for two years as a teacher in Sukabumi before I got married and lived on the tea plantation in Central Java. This plantation plays a major role in my first novel ‘Duizend eilanden’ ( Thousand Islands).’

In 1932 she marries Boet (Fernand de Willigen). He is a tea planter, son of a Dutch father and a half-Ambonese mother. They cannot stay long at the tea plantation on Java. Because of cutbacks Boet is fired in 1933. They go to the Moluccas to start up an old kajapoet plantation on the island of Buru. Life there is a lot more adventurous than on Java. She describes her experiences and has literary success. In the Moluccas their sons are born: Hans (1933) and Ru (1934).

The occupation of the Dutch-Indies by the Japanese in 1942 turns everything upside down. For many, this is an incredibly difficult time. Beb Vuyk is no exception. Beb, Hans and Ru are arrested and send to camps. Boet is forced to work on the Burma railway in Thailand. Son Hans is moved to a boys’ camp in Bandung. Beb stays in various camps and is held captive for a couple of weeks by the Kenpeitai, the cruel Japanese military police. She does not write or tell much about the Kenpeitai interrogations. The stories about this periode she writes down in her Camp Diaries (Kampdagboeken) issued in 1989.

Just after the war, the family gets back together. Boet, Beb and their two children survive the war, but now the struggle for independence erupts in Indonesia. Chaos is the status quo when the Japanese leave. The Dutch authority is gone. This period is called the bersiap period. Republican youth want immediate independence from the Netherlands. Bersiap and “siap” were the slogans: “Be prepared” and “Present Arms”. The Indo’s and the Dutch are at great risk.

Beb Vuyk returns to the Netherlands just for a short while. After the Bersiap period Beb and Boet opt for Indonesian citizenship and they go back to Indonesia. In 1946 Beb starts working as a journalist again and shows clearly she is an advocate of the Republic of Indonesia. Back in Holland people do not understand.

On behalf of some Indonesian magazines she reports on the news about the independent Indonesian republic. When she returns to the Netherlands in 1946 with her sick son Ru, the Dutch intelligence services believe that her return is linked to ‘republican activities’.

In 1950 Beb and Boet choose to become an Indonesian citizen and become a member of Sjahrir’s Socialist Party. In 1952 Beb visits the Moluccas part of the official entourage of President Sukarno. His policy becomes increasingly hostile towards the Netherlands and Beb is in conflict with the government. Sukarno threatens to take their passports and the family flees the country by boat to Europe. They get their residence permit, with great difficulty,  in 1960. Beb and Boet have been too loyal to the Republic of Indonesia. Attemps were made to boycott Beb’s literary work.

Beb Vuyk has an eye disease in later life. She’s unable to write anymore, but dictates all the 578 recipes from ‘Het Groot Indonesisch Kookboek – Great Indonesian Cook Book. In 1973 Beb Vuyk hands out her first copy to the acting ambassador Sujatmo Martosuhardjo. It becomes a bestseller, a culinary classic. 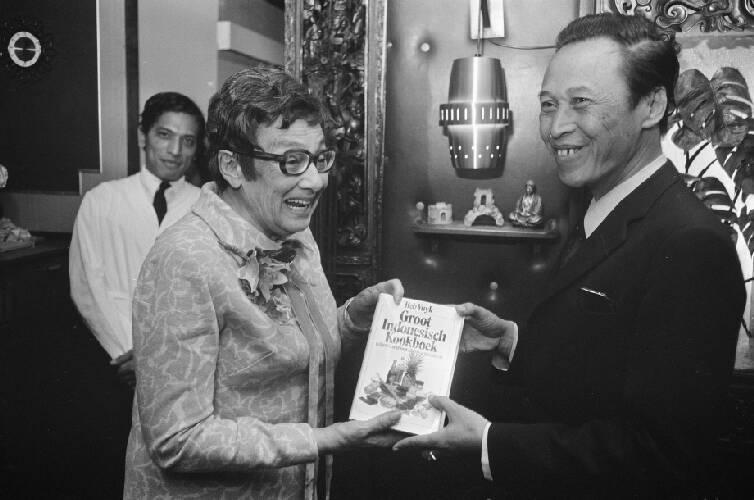